outLINE presents:
In the context of Infinity Palace a large installation work of Mischa Rakier

Supper Effect: live-lab for mirror neurons by reaction-lalou
Thursday August 18 till Wednesday August 24
An interdisciplinary project of Maria Lalou in which interactive installation, video and applied science come together.
During seven days the project functions as an interactive live lab, an installation in which the live lab processes can be followed via video registration, and a platform for research and discussion.

Supper Effect Lab
Thursday August 18 till Sunday August 21, 5 – 9 PM
Supper Effect investigates in a live lab situation, in which the audience is invited to take place at a mirroring table with 13 mirrored objects and 13 dishes displayed into the mirror space, how changes in perception in an endless mirroring space influences sensory experiences of taste, tactility and smell.

Supper Effect Presentation & Discussion
Monday August 22, 7 PM
Presentation of Raymond Ee, professor in experimental psychology at the University of Leuven. He will enter into discussion with the artist Maria Lalou about the hypotheses which Supper Effectis based on: how does the body adjust itself to an endless objectified space and time, what is its effect on our perception and senses and which role do the mirror neurons in our brain play in this process?

Tuesday August 23 - Wednesday August 24, 5 to 9 PM
Viewing of the Supper Effect installation with video images of the Live Lab process.

A time lapse always occurs between the event and our thinking about it. Nothing happens in the present; everything is “always already” behind us, from the standpoint of time. There is no present tense, and therefore there approaching the influence of an intermediary space and the way we perceive. Time Lapse traces meaning between spaces considered irrelevant being aware of the two points connected, as one can trace memory as living in between times.

invitation image to the audience/performers of the work

OPERATED PERFORMANCE INSTALLATION TEST 2 is a work that took place in the building of DasArts in Amsterdam. DasArts is located in a historic school building - the former ‘Open Air School.

The event starts by the call to a specified audience. How does the intervention of a social event relate to the structure of a performance set up in a Master of Theater, while the participants are the ones studying and the surrounding pupil? OPERATED attempts to subtract the event from the event while developing it at the same time of staging it, directing it and interacting within its own logic. Where is the tension of the event once the audience can shift their position under a certain system of instructions within the accumulation of viewing?

The Open Air School was first publicly opened on the 31st of March 1931. Architects of the ‘Dienst Publieke Werken Amsterdam’ designed the building. The pupils of the school consisted of children with respiratory problems and the frail in need of rest and recuperation.

Inside the empty political context and conditions remodelling the sense of reality, a continuous temporal sequence of 'ν' hours, addresses the conciliation and parallel relationship of viewer and empty viewer reception as an apparatus space, as a space through indirect view and direct 'reality'.

On 3-12 December and within 24 active hours the puzzle  group studies how the interaction with space can develop temporal sequence, focusing on the communication and miscommunication path.

In reference that one perceive things that are not immediately evident... the viewer will experience an architectural representation of the brain scan, via the constant reconstruction of image and speech

Q: Mr Aymo-Boot, your designs are often commenting on the ideal of development through architecture. How does the use of projective space give existance to a physical space?

Q: Ms. Lalou, in your work the spectator is invited to enter into an experiment with his or hers mind as the main stage of action. How does the presence of the spectator introduce a mental space to the physical space?

the act of projective architecture

essay by Edzard Mik based on the project [UN]FINISHED

'the act of projective architecture' in Venice 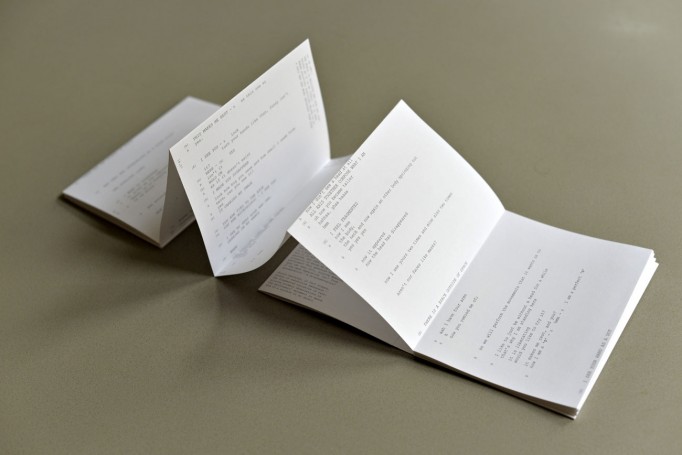 Research residency in Athens with Skafte Aymo-Boot, looking into the 2nd phase of the project [UN]FINISHED, collecting data from numerous un-finished concrete structures in the city of Athens

'the act of projective architecture' in Cittadellarte

Invited by Nikos Doulos (Expodium) in the context of UNIDEE-university of ideas during a week of exploration on rather ‘dimmed’ processes of acting on ‘unmaking’; processes deployed in the basis of our every day encounters.

The exhibition ‘ARTEFACT’  unfold part of the history of selected  buildings from the archive in development of the work [UN]FINISHED, creating links between the exhibition space and the concrete cityscape outside it.

The Operational Model lecture is an opening to the logic of a system of operations where a viewer becomes an observer, an observation point and again a director of the gaze with a fade out back to the system through direct feedback. The topic at stake is the performance act of ‘the looking’.

Artist at Work at ISCP

program and details will follow here in short notice

By multiple times removing the experience of a rather significant original experience I AM A 'Φ' is a performance attempting to produce imagination of an existential state via its constant tension and repentance.  Intention becomes tension and again intention. How does the platonic ideal, enhance the forth side of imagination? A piece that comes as the 5th circle of research based on the initial work of Maria Lalou - PUZZLE produced and performed at FROWN Athens on December 2012.

installation is a collection 'objects'  signifying the erasure the information in the performance I AM A 'Φ'. 'read' is an independent work that functions as a memory re-occurance for the performance work I AM A 'Φ'.
Open Lab June 2013 - DasArts Amstedam

a-symphony
An interdependent relation between antisymmetry and symphony.
How does 'a space' relates to 'the event' ? What does rapture create
between the parallel and the simultaneous. If gesture takes the space
of sound composition then the body reacts to the function of 'a distance'.
more info here
Saturday 22 June 2013
18.00-22.00
MIDSUMMER NIGHT’S DREAM
Location Amstelpark - de Glazen Huis
by Zone2Source curated by Alice Smits

_ _ _ _ / _ _ _ _ [UN]FINISHED has as protagonist the architectural archetype of the unfinished concrete building found everywhere in the Athens cityscape. These structures are exposing the concrete skeleton hidden under the facade finishes of the buildings composing the cityscape. They are signs of invisible financial and political structures defining the physical appearance of the city. With its character of a ruin of a forgotten purpose the unfinished building is at the same time pointing to the past and to the future. A frozen moment of time decaying ever since volume reached that concrete state. Within the context of ReMap4 _ _ _ _ / _ _ _ _ [UN]FINISHED addresses the inaccessibility, the potential of the unused space, and the relation of private and public.

lecture performance at 'Jungle' Symposium in University of Leicester

curated by A. Karatzogianni, D. Panagiotopoulou, A. Fermont